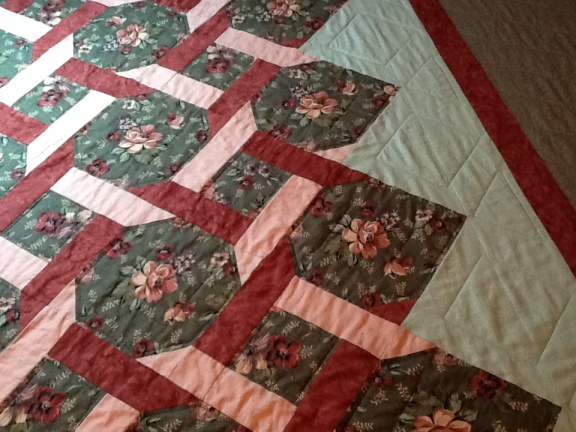 Today, you can almost cross from one to the other without really crossing any of them.

But the town, many years ago, didn’t even have one bridge across the river. Hard to believe but the two bankside communities had no reason to cross from one to the other, despite being two halves of a single town. They had nothing to trade with each other, no desire to cross-breed, no curiosity as to the nature of each other. Simply waving was enough, it seemed. Making faces only came in with the invention of binoculars. And they’re not yet invented.

The gorgeous flowers on each side were worth a visit, though, with each community using different horticultural methods. The odours became one sumptuously old-fashioned waft; the colours a rolling quilt of individual blooms merged into individually soft jigsaw pieces; and viewing from a distance or close-up creating contrasting patterns and visions.

So curiosity increased gradually, until twin bridge-building projects were started quite coincidentally by each of the two bankside communities without the opposite one realising that the other was also doing so.

The need to collaborate on any bridge would seem obvious but nobody had really possessed the foresight to appreciate the need for more precise communication other than the traditionally wistful waving or other gestures of the hands across the wide water-currents. To have configured these open admissions of mutual self-existence into a language of discrete signs seemed quite beyond any of their needs or desires. Not that anybody thought to ask themselves. Life was simply too good among the flowers and the benevolent dictatorships that passed through from time to time.

So how Tom grew up in a town where there ended up being too many bridges needs to be addressed at least in this story if not in more rigorous historical research that is beyond my abilities as writer as well as beyond the ready availability of documents and other proof sources. I do know for certain however that Tom was son of the east bank’s head gardener and, on the way to school, he could watch huge contraptions stretching towards each other across the river like prehistoric monsters. And hear them, too, as each noisily strained and creaked and groaned its stanchions, girders, rivets and other joints to join.

There was a girl about the same age as Tom who lived on the west bank and whose name was Flossie; she happened to be the daughter of that community’s own head gardener but, being a girl, she was not allowed to go to school like Tom. She was put to work in the flower beds, a flower among flowers.

It was not slave labour, of course, as this was an enlightened society. And Flossie did manage to take her required breaks down by the river where she often spotted Tom walking to school, satchel upon his back. He was the size of a toy soldier from some child’s model castle or fort. And no doubt she was a tiny figure to him from another child’s dolls house. Or so they both assumed, as Tom, too, was fully aware of her watching him especially as he had long been watching her. A single wave from one half town towards another half town was worth a sweetheart’s sweetest kiss to each other as long as that single wave was returned. The river itself now suddenly seemed to have its own waves of joy.

Indeed, as we learnt at the beginning, there was no desire to cross-breed between the two bankside communities. And the river had thought it strange as well as sad that this had always seemed to be the case. Hence, the joy it found in Tom’s and Flossie’s waves that it sensed passing across it, however otherwise distant they were. The growing pains of the multiplying structures that it heard passing across it were thus easier to bear.

But one joy canceled out one pain, leaving nothing. Each waved-over kiss was duly drowned out by each bridge’s sigh as one side’s mis-angled bridges eventually joined, one by one, sigh by sigh, with the wrong bridges mis-angled from the other side. And, you see, noisy pain soon enough turned into silent sorrow

And I am sorry I can’t provide a happier ending. That’s my stories for you, I guess. You know what I’m like!

Why they didn’t use the same cockeyed bridge as each other is beyond the scope of any possible research. But my story could end up telling you something about bunches of flowers being exchanged, if not kisses. But, of course, kisses could have been thrown, too. Let’s assume they were.

3 responses to “Too Many Bridges”