Finnegans Wake – a wake up call for all captchas 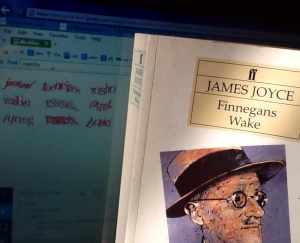 I began HERE a gestalt real-time review of FINNEGANS WAKE by James Joyce, a book in which I have dabbled reading for many years, but now tackling it for the first time from Began to Finish.

I am up to page 80 of this book today, and below are two extracts from my review upon which I require feedback from other FW readers like yourself. Please comment below in the unlikely event that you actually see this blog! No captchas needed?

1. There is a plot to this book that several have tried to adumbrate over the years, a special Joycean language that others have tried to nail down with a single word of description, characters that chop and change, themes and threads that also chop and change, all of which elements the critics have tried to plumb (see the book’s Wikipedia if you must)…..But I contest that any attempt to plumb these things will come back to choke you. So I won’t. I just know there is an experience to be had here and I hope by the time I reach the end such an experience will have become the whole of me rather than a part of me that I try to examine from outside. Examining life from within the same life, the mind from within the same mind, all doomed to failure – but Finnegans Wake itself is the only ‘death’ we shall know retrocausally. Our own death experienced after it has happened? We shall see or, at least, I hope, I shall see: “For dear old grumpapar, he’s gone on the razzledar, through gazing and crazing and blazing at the stars.” (Page 65)

2. So far, I see I have instinctively used the terms ‘capture’ and ‘captive ‘ above. In fact, the text reminds me of the ‘captcha’ codes we are often presented with as necessary bot-proof gateways for you being able to ‘manipulate’ sites on the internet. And these codes are real words changed or confused by Joyce (like the characters themselves) into such captcha codes – gateways to what I mentioned earlier regarding the manipulation of death? The ‘finegan’ wake after death – a way out of death? In this light, I again wonder how anyone has not noticed — except me? (please tell me here in reply to this comment if I am wrong about being the first to notice) — that Finnegan as a word is a blend of Finish and Began, and this also ties in with what appears to be generally accepted, i.e. that the Finish of this massive book runs into the ‘riverrun’ of where it Began!

Report From The Interior 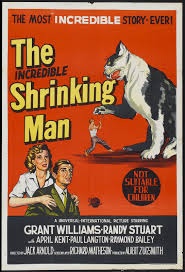 My gestalt real-time review of ‘Report from the Interior’ by Paul Auster is shown HERE. 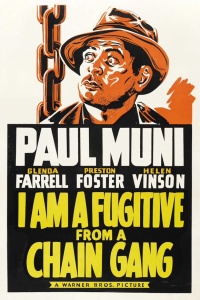 Tagged as Faber and Faber, I am a fugitive from a chain gang, Paul Auster, report from the interior, The incredible shrinking man