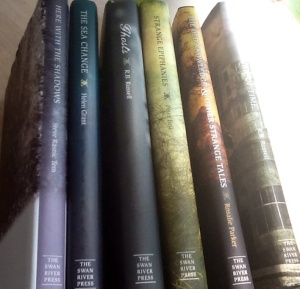 All my Swan River Press reviews:

The Sea Change & Other Stories by Helen Grant

The Old Knowledge – by Rosalie Parker

Here With The Shadows by Steve Rasnic Tem

The Dark Return of Time by R.B. Russell

A book purchased by me from the publisher and received in the last few days. I do not own one of the two previous book-printings of its fiction – although, in 2010, I read its stories kindly provided to me in a non-book format.  I am now glad to have all the stories in real book form.

My real-time reviews of this book’s fictions when I first read them as based on their earlier incarnations in 2008/2009:-

(1) Putting the Pieces in Place

A lovely story that features many of my passions – classical music, Venice, coincidences (jncluding the strongest possible coincidence that can create a rare unlikely situation of there being no coincidences at all!), a reel to reel tape-recorder, a ghost and its frisson, a mention of Proust… but fundamentally it seems to ’explain’ my ownership of these printed stories in the first place, my destiny to become a collector manqué or a collector completist – a piece put in place that caused me to be able to read the stories from unreal to real. (23 Apr 10)

(2) There’s Nothing That I Wouldn’t Do

“The connection between the signifier and the signified is arbitrary.”- Ferdinand de Saussure (1857 – 1913)

A memorable story of stalking in Ukraine and p***k-teasing…

It seems to combine Architecture and Language in a state of real and metaphorical subsidence. (24 Apr 10)

Incredible, I suppose, that I seemed above to predict – meaningfully, as it turns out – the name of one of this story’s ‘protagonists’, i.e. Ferdinand!

I also predicted the ending of this wonderful ghost story before I reached it. That’s not a criticism. It seems perfect for a book with its overall title of ‘Putting the Pieces in Place’. Gave me a good feeling.

A coolly-told story of a sunburnt Greek island, of an exile because of scandal and a strange companionship. I wonder if it was a ‘spoiler’ to have said above that I predicted the ending. Only if you the reader predicts it correctly, too. And you won’t. (24 Apr 10 – three hours later)

A believable and touching scenario of a Science Fiction convention … of an aging writer as a guest there, one who once created someone who has now become a cult female character since further propelled in various media by others … and he now meets her seemingly ’for real’ at that convention. A fable, as it turns out for me, of a character creating its own author just as much as an author creating its own character – and each taking the main chance to fleece the other by whatever means of creativity or harsh reality. Except both, here, can shrug off their own reality sincerely to love each other’s unreality. Real to real. Unreal to unreal. (24 Apr 10 – another 3 hours later)

“Andrew told his mother that Jayne seemed to him to be something of a blank canvas.”

A female at a loose end between relationship and shelter. The tape, too, when it flaps around and around at a spool’s loose-end. A dead pet or a residuary full groin, we have here a feel of that Ukraine stalker again, but who stalks whom? Here we are left to find our own way home to a chapter or story that I was given prior opportunity to read but have been too busy elsewhere with other chapters or stories. Who says a book’s stories should be read in order of printing, especially if they’re loose-leafed? But what else can I logically do when faced with real-time?

It is difficult to draw gestalt from this exquisitely Russellian book’s leitmotifs, as this story’s last reel continues flapping around. At least I now have some period of grace to regroup as reader, to escape the ancient scratches and feelers around me upon a tabula rasa or screen. All the pages freeze-framing, separate from the spine or spindle that once kept them together.

This is a stunning novella I’ve just been compelled to read in one sitting – compelled by a fear of its words changing before I got to them. It starts as a country house shenanigan where young people might say in a different book: “Anyone, for Tennis?”

Not that famous Monty Python sketch, well, maybe it is, in a sense.

No, it is something seriously decadent and Dorian Gray and Stephen Poliakoff and pre-Raphaelite … with Elizabeth-Bowen-esque nihilism of a fractured soul. The Tabula Rasa of love … and a rite of torture that unfolds so slowly in such a quick book, one is driven along by it. This whole force of onward fiction has a very clever ending. I believed every word.

I felt I wrote it. The book itself – as a physical object – struck me as one of those old French books whose pages you needed to uncut. But someone had done it already.

All my real-time reviews are linked from here: http://dflewisreviews.wordpress.com/