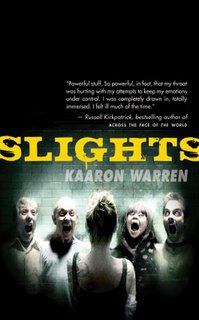 So far, I am enormously impressed with this book. A popular Horror blockbuster with literary edge and texture and stunning originality. Perhaps more from me about it later.

I now note I have already reviewed a Kaaron Warren story when I real-time reviewed ‘The Alsiso Project’ here: http://weirdmonger.blog-city.com/the_alsiso_project.htm
At that time, the name meant nothing to me.

If Gary McMahon’s forthcoming ‘Angry Robot’ book is as good as this one (and I’ve no reason to think it won’t be) then I shall be in for another enormous treat.

HarperCollins (who own Angry Robot books) produced last year the ANONTHOLOGY project (that I reviewed here: http://weirdmonger.blog-city.com/anonthology.htm) in the tradition of Nemonymous. I am proud that Gary McMahon has been in three separate issues of Nemonymous with his literate yet compulsively accessible style.

As a relevant aside, please see the discussion of SKIGHTS (sic) at link immediately above.
2. Weirdmonger left…

Sorry, I have now been told that fiction of mine appeared in an anthology (‘Nasty Snips’ in late nineties) alongside a story by Kaaron Warren! 🙂
3. Weirdmonger left…

Progressing through the book. About halfway. Despite its relatively simple prose, it strangely seems necessary to savour it slowly. It is certainly a cut above much else with similar covers. A number of cuts above.

I’ve especially enjoyed the concepts of writing a novel in the margins of various library books.

Also on the brink of cracking up if one empathises too much with the main protagonist. And that’s the horror of the book. Being drawn in too far. More later, perhaps.
4. Weirdmonger left…

About three-quarters through now. It’s strange how things can creep up on you without realising how it is done. I hadn’t fully appreciated certain aspects until they dawned on me slowly. Dawning slowly is more powerful than attacking me as an axe-murderer would. The book’s words seem to carry meanings increasingly more than they should carry. The protagonist seems to be in collusion with the book as a Trojan Chameleon. You can’t really talk about it without spoiling it. I don’t want to make an enemy of this book, however slight. Perhaps more later.
5. Weirdmonger left…

Tonight, I finished ‘Slights’… and it will leave scars of a read that almost reads itself, slowly, agonisingly. I can hardly credit Stevie copied out all those words added to the library books. But of course I credit it. It was the the Catcher of the Right and Left Margins. Significant that one of the library books was Elizabeth Bowen’s last novel, ‘Eva Trout’. “A little was enough, sometimes.”

‘Slights’ is a significant book that lifts out of any genre it’s framed within – a bit like Auntie Jessie’s marginalia. An ever-spreading photographic plate that no dark room could possibly handle. The preterite of ‘slight’ is ‘slit’.

Stevie: “If you’d ever taken the time to listen to me you’d know all this. You could have stopped me.”
6. Weirdmonger left…

All my other real-time reviews are linked from link immediately above:
7. Kaaron Warren left…

This is a fascinating review! Thank you. Do you mind if I link to my wordpress page?

That must be an interesting bookshelf!

4 responses to “Slights – by Kaaron Warren”